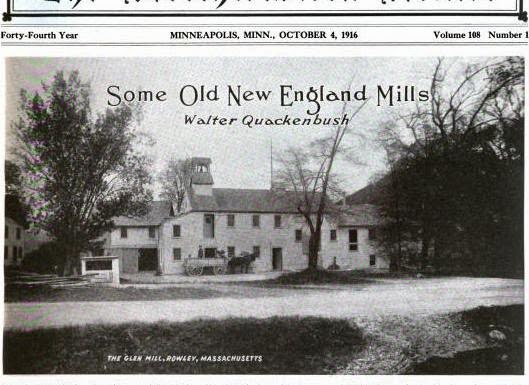 NEW ENGLAND has always been more noted for its cotton and paper mills than for its flour mills, and has become famous the world over in these other classes of industrial effort; yet strange to say, what are perhaps the oldest flour mills in the country are located in New England and characteristically prove their sturdiness by their continuous operation.
Two of these are tidewater mills—one located at Rowley, the other at Gloucester, Mass. The one at Rowley, known as the Glen Mill, is the older of these, and has been operated continuously except for a short period, since 1643, that is, 273 years. The exact date of the building of the Gloucester mill is somewhat in doubt, hut it is known to be over 250 years ago. It is called the Riverdale Grist Mill.

Sent to me via Laurie Short Jarvis painted by Mildred Cahoon Hartson (1904-1997), former president of the Nbpt Art Assoc. Her mother was Lula May Short (1883-1944). This is a painting of Mildred's interpretation of the Short's tide mill at Knight's Crossing Newbury, MA . Noted in Mildred's own hand. (Lula May was the daughter of Henri M Short, Henri was the son of Samuel Sewall Short Sr (1848-1926) and on back to first settler of Newbury Henry Short). 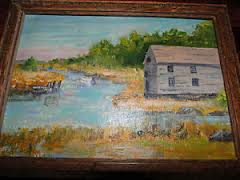 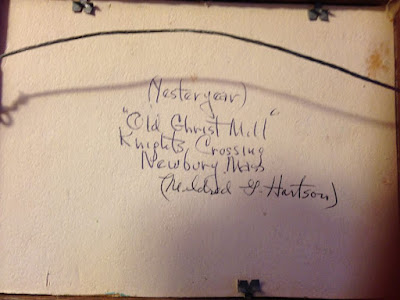 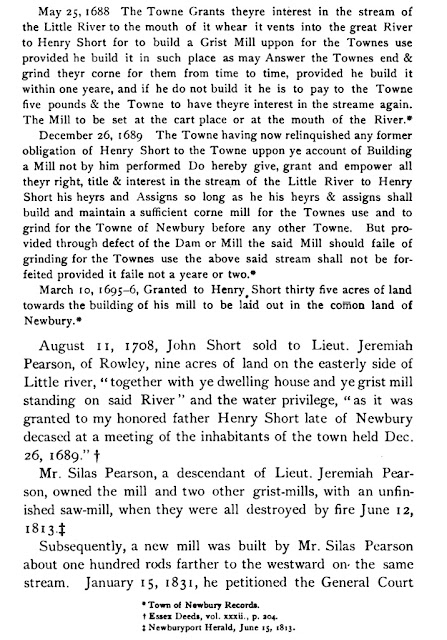 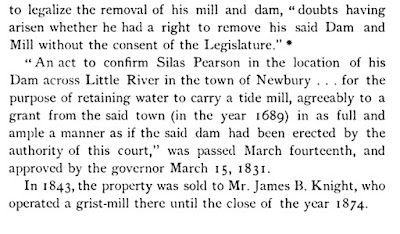 Private and Special Statutes of the Commonwealth of Massachusetts, Volume 7 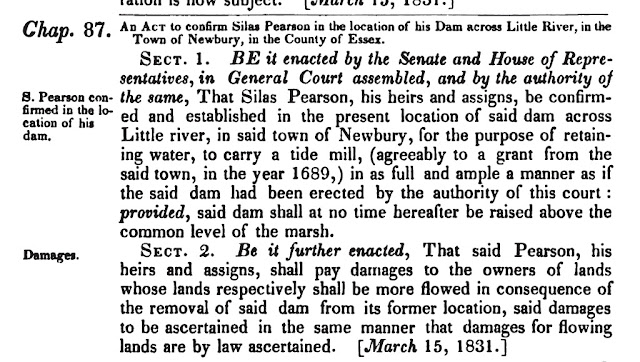 List of Patents for Inventions and Designs, Issued by the United States ...By United States. Patent Office, Edmund Burke 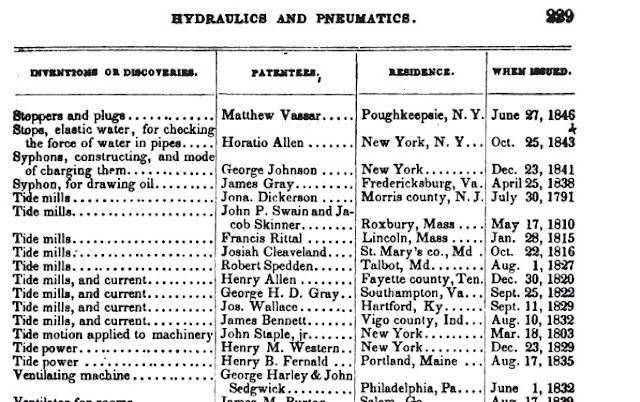 From American Notes and Queries, Volume 5 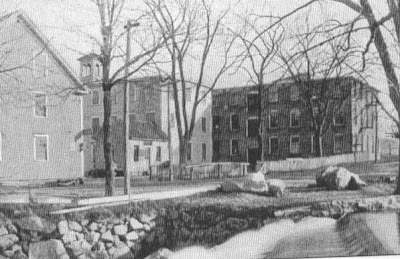 The Rowley mill, in the ancient parish of Byfield is owned by descendants of Richard Dummer. Even today, after so many years of service, the old mill presents much the same appearance that it did when the river was first harnessed to the wheel and the large round stones took the place of the pestle and mortar.
The original building has been enlarged to meet the demands of the increased imputation, but the same dam, with the identical stones and timbers imedded in the mud, the same waterway and foundation for the wheel-box, stronger with time, though showing signs of age, are still there.
The mill is situated in the midst of a pretty valley, where the waters pour down in between sloping hills, while on either side of the stream, as far as the eye can see, are towering oaks and pines and white birches. 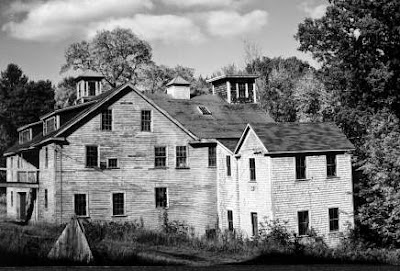 The first Dummer mill in the new world was built at Roxbury, Mass., by Richard Dummer, a rich Englishman, who came to the colony in 1632. He remained in Roxbury until four years later, when he fell into disfavor with the governor because of untimely political activity, and removed to the parish of Byfield. Here he was granted a large tract of land in consideration of the establishment of a grist mill. In 1638 the waters of the Parker River were first troubled by artificial barriers and machinery. John Pearson and Richard Dummer were the original millers of the town, and for a time were partners. Then Dummer acquired the whole interest in the mill.
THE OLD GLEN MILL
In 1643-4 Thomas Nelson was allotted 36 acres of land on what is now Mill River for the purpose of erecting a saw and grist mill. The partner of Richard Dummer soon acquired this new mill, and this is the one which is now known as the Glen Mill, and which has been in the Dummer family for so long. It figured largely in the history of the times.
In the King Philip War a large number of men were drawn from Byfield, and with them were carried wagon loads of meal for their own and for their compatriots' fare in the struggle which followed. Still later, in the French.and Indian War, the stone wheels of the old Glen Mill ground the corn into meal for the fighting men of Massachusetts Bay colony.
With the news of the first English depredation, plans were made by the men of the town to join the Continental forces and to send meal to the army. The old Benjamin Coleman house, which is still standing, was made the rendezvous. Here a little later a large wagon was prepared and loaded with meal from Glen Mill—as much as the wagon would hold—and with a guard of patriots the trip to Valley Forge was made and the contents turned over to the quartermaster of Washington's army.
The first Dummer mill on the waters of the Parker River was suspended after a long life, and Samuel Dummer acquired the present Glen Mill in 1817. The family had always been millers, as far back as legend recounts, and so, after a lapse of years during which the mill was out of the family, it was but natural that a member of it should want to get it back again. It has been under the management and ownership of a member of the family ever since.
The old undershot wheel was replaced a number of years ago by a small turbine, but old-fashioned millstones are still used for grinding the corn. Before the old wheel was taken down, the structure and its surroundings represented a typical mill scene of 300 or 400 years ago. The wheel was 35 feet in diameter, and the roof was low and sloping, reaching almost to the ground. The dimensions of the building were much smaller than at present.
RIVERDALE Mills
The Riverdale grist mills, located at Riverdale, Gloucester, still continue to make their daily grind, as they have done almost unceasingly for the last 250 years, with power supplied by the waters of quaint old Mill River.
These ancient mills, hearing unmistakable signs of the wear of two and one half centuries, form an interesting and important part of Gloucester's history. Situated in the heart of picturesque Riverdale, where Boston residents annually find a summer retreat, the dilapidated buildings and running stream, with its churning foam, have a charm which makes the place more attractive.
The present owners of the mills have made no effort to disturb or modernize them, while annually between their stones thousands of bushels of grain are being ground into flour or meal. Over 25 years ago, the mills were purchased by the late Albert Dodge in connection with the grain business he maintained in the city proper; and after his death, the property was taken over by the Albert Dodge Co., the present owners.
The Gloucester mill was at one time the most important, along the coast, and it was not more than 25 years ago when ships laden with corn plied up the Mill River to have their cargoes ground. see Tide Mill Institute 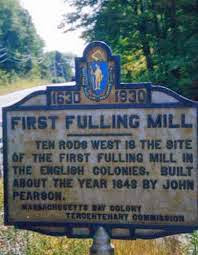 In the early days the means of producing food were of great concern to the settlers of New England, and though there is no record of a grant providing for a mill earlier than 1664 although it is known that one existed—there is a record of a grant in that year by which the inhabitants gave to their pastor, the Rev. John Emerson, "all the rights, privileges, ponds and streams belonging to it and all fresh meadow thereabouts," provided he would keep a mill in operation and repair, and grind the grist of the townsfolk. The Short Pearson Mill was Henry Short (Short Family Group Facebook) and Jeremiah Pearson see Early records of Parker Family Andover 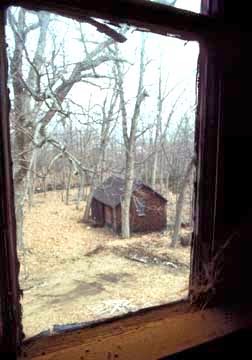 From votes of the town, passed some years later, an inference may be drawn that Mr. Emerson did not for a long period make any use of the grant, for on Feb. 18, 1677, the town voted that a corn mill should lie set up and erected on the sawmill dam and the town give the stream to the saw mill. "Saw Mill Dam" is the place now occupied by the tide mills or Riverdale mills. Copyright. 1916. by The Miller Publishing Co. The Northwester Miller Volume 108 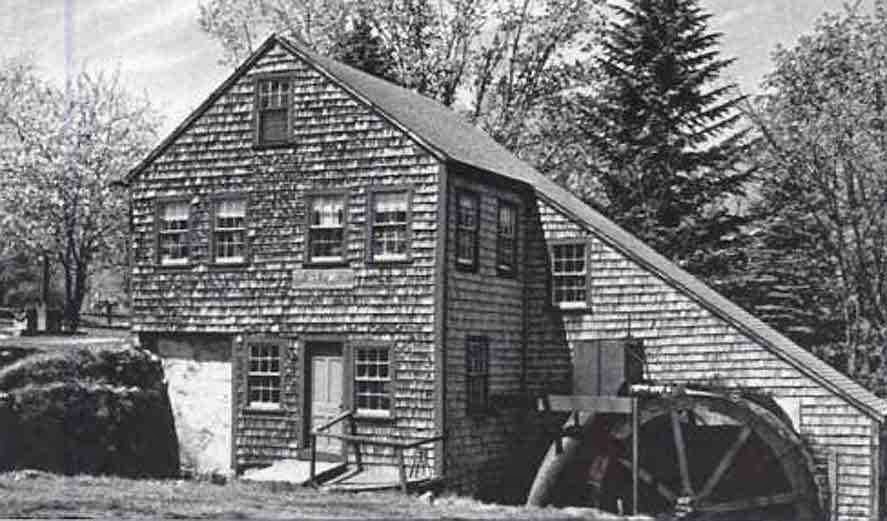 Built on the side of the Glen Mills, and the first fulling mill in America, built by Richard Holmes built in 1642, and known as the Pearson Mill.  see more on Pearson family
check out
The Village Mill
John M Bishop Blog
Industrial and Agricultural History of the Parker River Watershed
CHAPTER 4: ANNISQUAM AND MILL RIVERS: The Cut to Goose Cove
New Life in the Old Mill Pond
Pearson snuff mill
Little Old Mills, by Marion Nicholl Rawson, 1935.

Posted by Melissa Davenport Berry at 5:54 AM