Lady Deborah (Dunch) Moody was a dame not to tangle with. Founded a colony and in 1655 she won the right to vote in her own town meeting Gravesend, Long Island. See A History of the Town of Gravesend, N.Y. By Austin Parsons Stockwell, Wm. H. Stillwell
She was the widow of Sir Henry Moody, of Garesden, Wiltshire, who was one of the baronets created by James in 1622. Her parents were Walter Dirndl, a member of Parliament in Elizabeth's time. Family politics were liberal and she obviously was influenced by this. Her mother was Deborah Mervyn (Pilkington) daughter of James Pilkington, Bishop of Durham and Alice Pilkington.
Thus, "in close sympathy with those who battled for constitutional and natural rights." Her desire to flee England was for religious freedom and her ideas were like Ann Hutchinson-Anabaptist.
See Barbara Wells Sarudy The Dangerous Lady Deborah Moody - Only Women to Found a Colony When she arrived she settled in Lynn and in 1640 the General Court of Massachusetts granted her 400 acres of land, to be selected by her, for a plantation. In 1641 she purchased the large farm of John Humphries, at a place then and now known as Swampscott, near Lynn.  She was admitted of Salem church, April 5,1640. In 1043, she fell under censure for denying infant baptism, and removed to Long Island, where she resided for many years, enjoying in large measure the favor of Governor Stuyvesant. See Winthrop's History of New England, II. 123, 124; Felt's Annals of Salem, II. 67T; Savage's Genealogical Dictionary.
John Winthrop on Lady Deborah Moody: "The Lady Moody, a wise and anciently religious woman, being taken with error of denying baptism to infants, was dealt withal by many of the elders and others, and admonished by the Church of Salem (where she was a member), but persisting still, and to avoid further trouble, etc., she removed to the Dutch against the advice of her friends. Many others, infected with Anabaptism, removed thither also. She was after excommunicated. With the exception of her troubling the church with her religious opinions, she appears to have been a lady of great worth."
Letter from The Winthrop Papers

LADY DEBORAH MOODY  TO JOHN WINTHROP, JR.
To y worshipfidl  my much honored frend Mr John Wintrop at his howse at Pequid giue this. [1649] Worthi Sur, — My respectiue loue to you remem[bered,] acknowliging my selfe for youre many kindness[es] & respecte to me much obliged to you. I haue writen diuers times to you, but I dout you haue not receued it; at present, being in hast, I can not inlarg my selfe, only my request is y* you will be pleased, either by this bote, if in your wisdom you see not a conuenienter opertunitie, to send to me those things y' Mf Throgmortone brought for me, & I vnderstand are with you, for I am in great need of ym, together with Marke Lucars chest & other things. So with my respectiue loue to you & youre wife, with M? Lacke, remembred, hoping you & they, with youre children, are in helth, I rest, comitting you to ye protection of y° Allmighti. Pray remember my nesesiti in this thing. Deborah Moody. Indorsed, "Lady Moody." 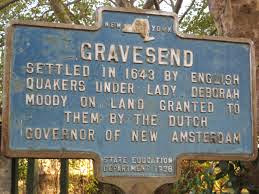 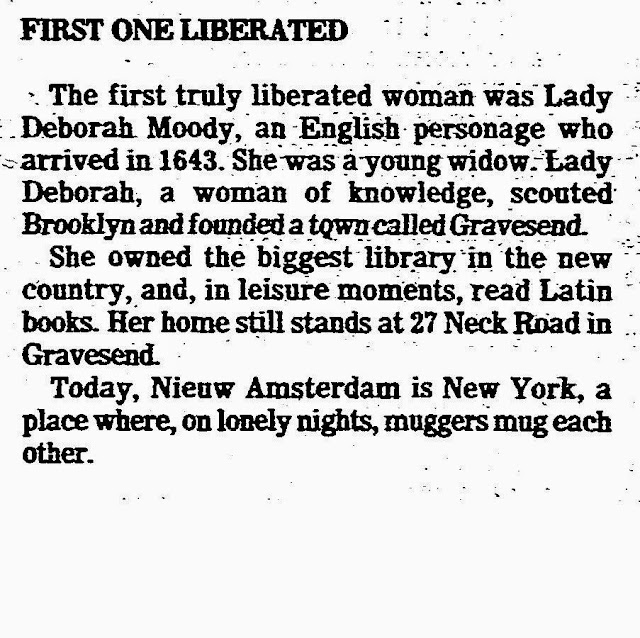 From Long Island Genealogy LONG ISLAND HISTORICAL BULLETIN," April 1913 Charles Andrew Ditmas, Publisher, 350 Fulton St., Brooklyn, N.Y. Copyright 1913
On December 10, 1645, Lady Moody, Sir Henry Moody, Ensign George Baxter and Sergeant James Hubbard, with their associates were granted a patent by Director Kieft. The settlers entered into an agreement at Amersfoort with Lady Moody and her associates by which the town was to be divided into 28 parts, each to receive a plantation lot, also a village lot. In 1646 a new division was made, laying out the town into 40 lots and: 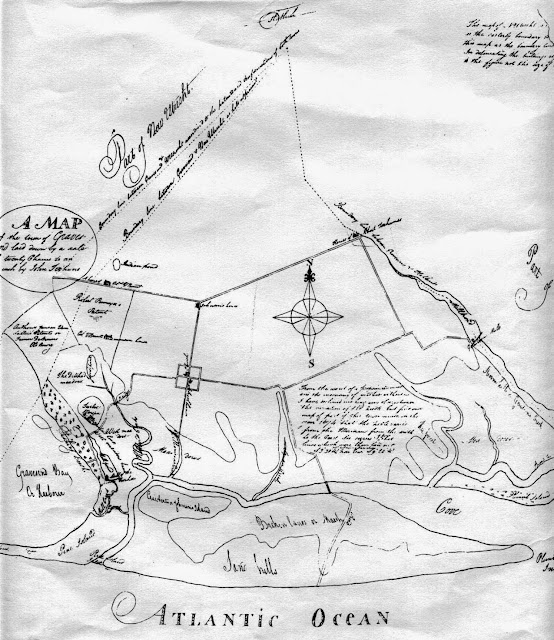 Those who took part in the first division, which was given up owing to the Indian wars, of Director Kiefts administration, were:

From  To Save A House Of History. The Mansion of Lady Deborah Moody to Be Restored
Friday, May 19, 1911 Times-Picayune (New Orleans, LA) (NOTE: This is not accurate, but several believed ths at one time was her home)  This house dates to either 1665 or 1770, depending on which account you believe. Brooklyn historical records have Sir Henry Moody selling the property on which the house stands in 1659 to Jan Jansen ver Ryn, who built the house sometime between 1659 and 1663, when ver Ryn sold the property. It passed through various hands before winding up with the Van Sicklen brothers, John and Abraham, who may also have built the house in 1770. In either case, the house never belonged to Lady Moody. “Lady Moody House” is a fiction dreamed up by a real estate office in the 1890s. It’s a very old building no matter how you slice it. 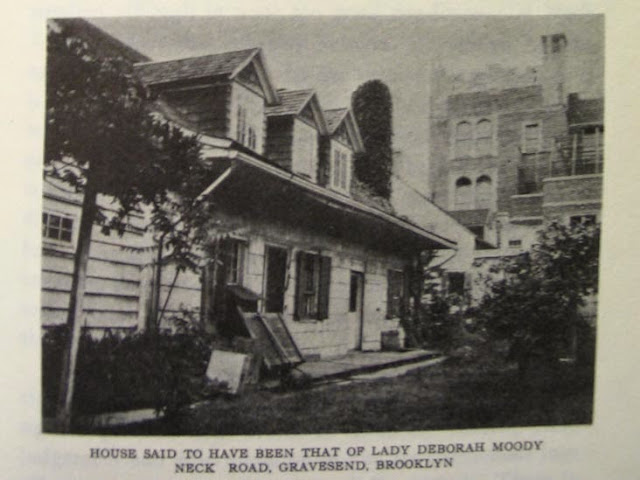 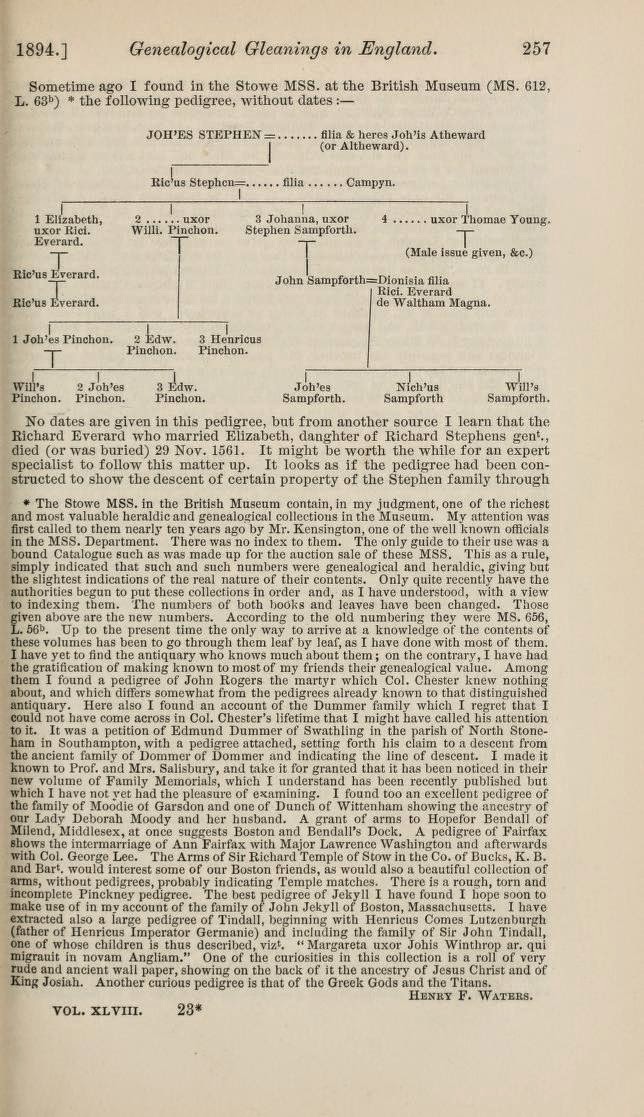 History on house:  Swampscott
In 1640 she had purchased a lot at Sangus, near Salem, and was granted, at a General Court, 400 acres of land. She was not banished from her native country, but came over suo moiu to the New World, having sold her ancestral estate before leaving. In her New England abode she had "a beautiful farm, situated between the ocean cliffs and a river, stocked with cattle, and put under cultivation." She also built for herself a house there, which was well furnished, and had within it one of the best libiaries in the then infant colony.
Thomas Clinton, third Earl of Lincoln, d. 15 January, 1619 ; m. Elizabeth, daughter of Henry Knyvett, of Charlton, Wilts, and had: Lady Susan Clinton, who m. “ John Humfrey, Esq.,” 1595—1661, a lawyer, of Dorchester, in Dorsetshire. Mr. Humfrey was one of the six gentlemen to whom the council of Plymouth, England,in March, 1627-8, sold that part Of New England “between three miles north of the Merrimac and three miles south of the Charles,” for the Massachusetts Bay Company, of London; John Winthrop, Governor, and John Humfrey, Deputy-Governor. Mr. Humphrey came to New England, with Lady Susan, in July, 1634, and made his home on his farm of five hundred acres at Swampscott (Lynn), Massachusetts, and entered upon his duties as assistant, and was one of the founders of Lynn. In 1640 he was a member of the Ancient and Honorable Artillery Company ; in 1641 was appointed to the command of the militia with the rank of Sergeant Major-General. He and his wife, Lady Susan, returned to Sandwich, Kent, England, 26 October, 1641, having sold his farm to Lady Deborah Moody.
In the year of our Lord 1643, the authorities of New Amsterdam, under Governor Stuyvesant, granted a residence, at " S' fJravensande," now Gravesend, L. I., to " Ye honored Lady Deborah Moody, Sir Henry Moody, and others, with power there to erect a town and fortifications, and enjoye the free libertie of conscience, after the costome and manner of Holland." The place is opposite the Narrows and our noted Coney Island, originally "Couyen," and the Moody settlement was intended for a large city. Lady Moody, the widow of Sir Henry Moody, of Wiltshire, England, was a nonconformist who emigrated thence to Salem, in New England, in 1836, accompanied by her son, then a young man. The cause d'etre of her coming to New Amsterdam is intimated in the following extract from one of the old New England histories: "Lady Moody, a wise and anciently religions woman, who, being taken with the error of denying baptism .to infants, was dealt with by the Church of Salem, whereof she was a member; but persisting still, to avoid trouble, removed to the Dutch, against the advice of her friends."

When Lady Moody had died in 1659, when Sir Henry sold his Long Island property and removed to Virginia. In 1660 he was an Ambassador from that colony to New Amsterdam.


In the " New York Corporation Manual," edited by that admirable farmer, antiquarian, and City Clerk, David T. Valentine, in 1863, we find, in a chapter entitled " Law and Lawyers in New Amsterdam," the final record of Sir Henry Moody. It is given in the words of "Solomon La Chair, Notary Pablicus" of the city, in 1661, in which he speaks of going to the house of Daniel Litschoe, inn-keeper, at his request, to examine an obligation, written in English, and signed by trie baronet Sir Henry Moody, then deceased, who had died at the residence of Colonel Mowvitson, in Virginia, and had left "over fifty written and printed books of divers tongues," that were deposited in pledge with him, for the debt of Sir Henry.
A list of most of them, given in La Chair's report, is in the article by Mr. Valentine. One of them was a Latin Bible, in folio, and sixteen were Latin and Italian books of " divers matters." Another, a book in quarto, called " Bartar's Six Days' Work of the Lord," translated into English by Jos. Sylvester. From a "discourse" entitled "Lady Deborah Moody," delivered by J. W. Gerard, Esq., before the New York Historical Society, in 1880, to which we have been greatly indebted in preparing this sketch, a printed copy of which having been kindly handed to us by Mr. William Kelby, at the New York Historical Library, we learn that these books were sold, aud that the one last mentioned by us is now in the aforesaid library. It is possible that others of that Moody collection are scattered around among the old families of this city. Lady Moody seems to have been the only titled woman, at least of an English family, mentioned in the annals of New Amsterdam; and her name is, doubtless, to be held in honor as one of those eminent women of rank and wealth in the old country who, in the early part of the seventeenth century, were content to leave their comfortable ancestral homes, cross the seas, and endure so much hardship and danger "in the wilderness " for conscience' sake and liberty of worship. And it is certainly greatly to the honor of the ancient Dutch Republic that it so early declared itself in favor of such liberty, and thus took the lead in all Christendom, in adopting the Master's noble rule of giving " unto Cresar the things that are Caesar's, and to God the things that are God's." William Hall. 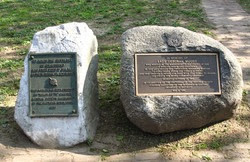