The Wolfe Tavern: The place where our ancestors tarried

My Article From Newburyport News 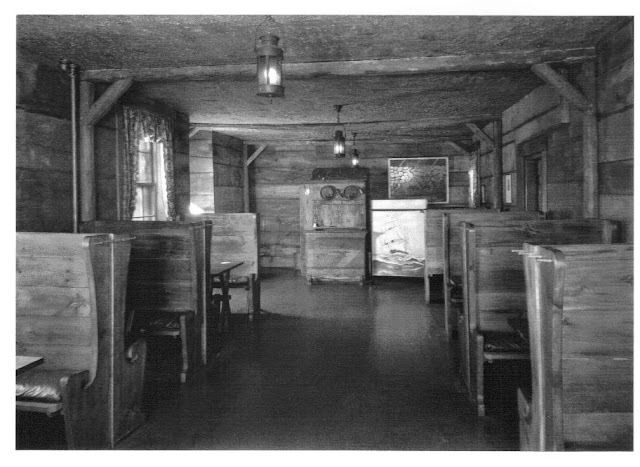 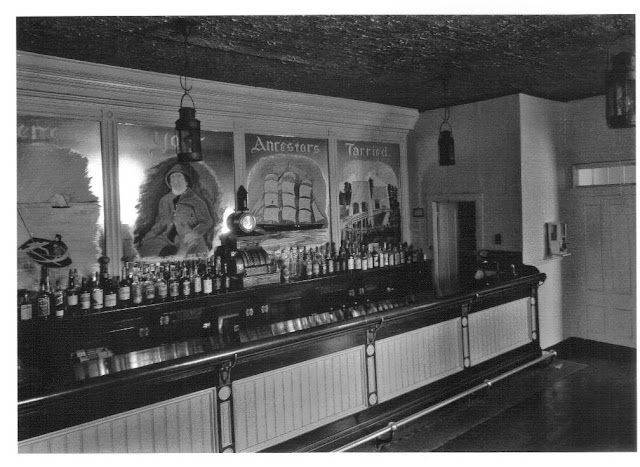 I came a across this news clip while doing some archival research: "Mr. H. Russell Perkins has brought home from Quebec a bayonet found on the heights where Wolfe fell in battle. The bayonet is now at the Museum of Old Newbury. Perkins was grandson of Harriet Davenport and Henry Coit Perkins both of whom born at the Wolfe as were their parents. I decided to ferret out more tales and tidbits of the old Wolfe to share with readers. See Who was Gen James Wolfe 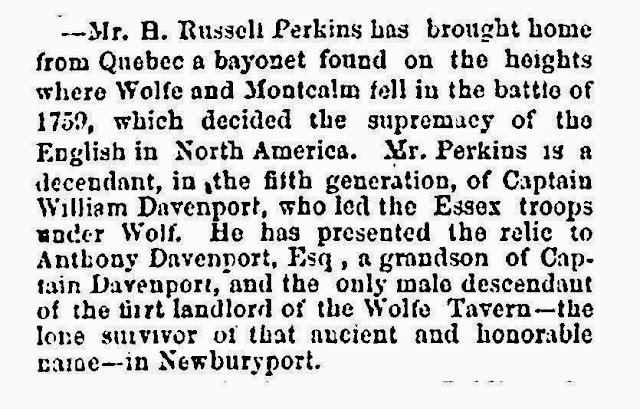 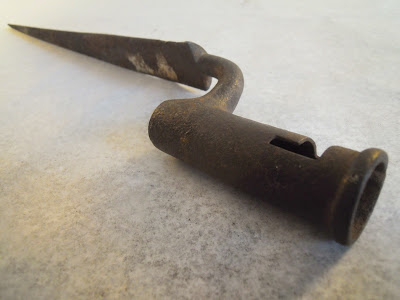 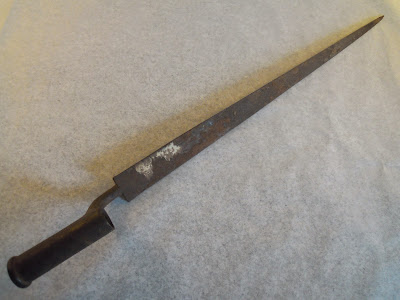 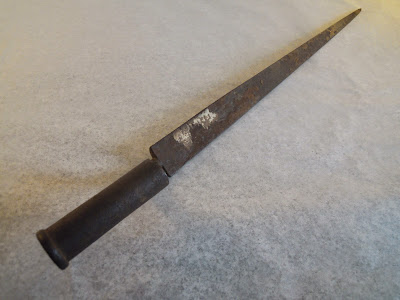 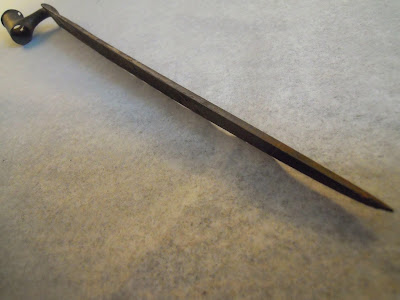 Photos of Bayonet from Museum of Old Newbury 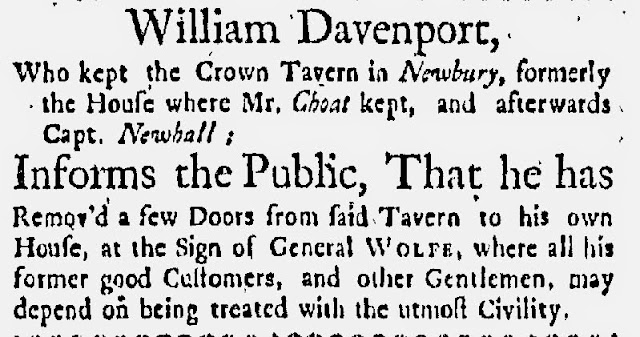 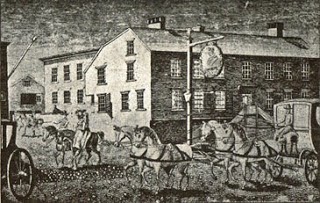 In 1762, Captain William Davenport opened his doors under the sign of General Wolfe. Sturdy patriarchs sat around the fire in Davenport’s parlor nursing their toddies while rocking the cradle of liberty. See Wolfe and Stamp Act
The Sons of Liberty rallied volunteers for the Continental army. They raised their glasses to toast Nathaniel Tracy and his “Yankee Hero” the first privateer outfitted to fight British fleets. During the Revolution Gen. Lafayette used the Wolfe for his headquarters.
The original Wolfe burned in the Great Fire of 1811 and a second opened on the corner of Harris and State streets.
The Wolfe was never without a jester. Such chaps included “Lord” Dexter, “Foony” Gerrish and John Denier, who “footed into the tap room” by walking across State Street on a tight rope stretching from one of the great mansion chimneys to the Wolfe.
For bedside manners no one topped John Greenleaf Whittier. He snored his nights away peacefully, “when it was considered something of an art.” 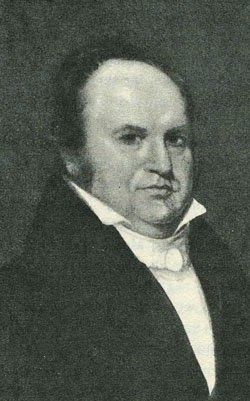 One Wolfe waiter had an eye for fashion and noticed a fine pair of boots on Ebenezer Moseley. The waiter paid a visit to the local shoemaker and insisted on having the same sort made: “Let em be jes like Squire Moseley’s,” he commanded, “only a quarter dollar better.”
Dueling rose up in the early 19th century and Bostonians needed a refuge from the authorities. Seabrook became an arena to settle scores. The battle was usually over an object, namely a woman.
The duelers each had a doctor and empire on hand. As a rule the crew lodged at the Wolfe on the eve of battle. They crowed in the lounge belting down liquid courage. At early dawn they would work their way over the border to some secluded area to “conduct their bloody business.”
A duel set to go down between a Harvard grad army general and a South Boston fellow (1809) made headlines. It was ignited when a Boston maid would give neither the satisfaction of who she fancied. However, the day before the match she sent a red rose to “Southie.”
“It smells of disdain!” cried the general. He never showed to fight. He was spotted at the Wolfe on “the hot seat” drinking and thinking his maid away.
In 1828, the Eastern Stage Coach Company purchased the Wolfe. The company flourished for 20 years until railroads reduced the need. However, a few of the “Old Whips” refused to hand over the reigns.
Major Samuel Shaw put on a coach with the fare at $1.50 to Boston. David Batchelder ran a coach from Amesbury to the front door of the Wolfe.
John G. Whittier put great stock in coach service. Guests at the Wolfe would receive the following note: “I’ll get my parcel or you will get your books if left in care of Mr. Batchelder.”
Edward P Weston, the world’s greatest walker rested his feet at the Wolfe. He was on a Maine to Chicago jaunt. The 68 year-old crouched up the inn steps with blistered feet and uttered “oyster stew.” He broke his own record that year.
Daniel Fowle, Wolfe proprietor was a close friend of native James W Westcot who became one of the best known professional gamblers in the country. He owned the New York Long Aces Club and the Manhattan Club at Saratoga.
If the chips were down for a Port pal Westcot always turned the wheel with a generous handout. At age 64 he fell ill and Fowle carried out his wish to be “buried with his kindred at Belleville.” A momentous service for Westcot was held at the Wolfe.
Unfortunately Westcot never mended a 25 year-old rift with his sister Katherine Tingley. She was founder of the Theosophical Society and Raja-Yoga School and spiritual differences split them apart.
Daniel Fowle passed in 1914, but wife Mabel kept the business going. Captain Arthur Clark, a successful mariner fell ill at the Wolfe and “in the tradition of old colonial hospitality” Mabel took good care of her guest. A bond formed between them.
The two passing ships felt “alone in the world,” and marriage was discussed. Due to the age difference Mable thought Clark suited her more as a father. Clark adopted her and bought 64 High Street where the two lived happily as companions.
Newburyport was “up in arms” when owner Robert S Weltsche closed doors and boarded up windows (1923). The Wolfe had operated without interruption since its early years, but Weltsche insisted he needed to tend to his health.
The city fathers were not pleased with his “conspicuous closing sign.” They warned him they would “get even” by withholding his inn holders and victualers license.” Weltsche quickly opened as one ad indicated in April 1924: 1,000 reward “no questions asked” for a ring left in the ladies room at the Wolfe.
When the Wolfe finally did close New England newspapers captured the general atmosphere with every headline reading: “Tavern Doomed.” (1953). The building was taken by the wrecking ball and all its contents sold in the W. P. “Chuck” Emmons auction.
The Wolfe tavern booths found a home at Ten Center Street in Molly’s Pub. Owner “Toby” Hoare took pride in serving spirits upon the same benches in which our ancestors tarried. 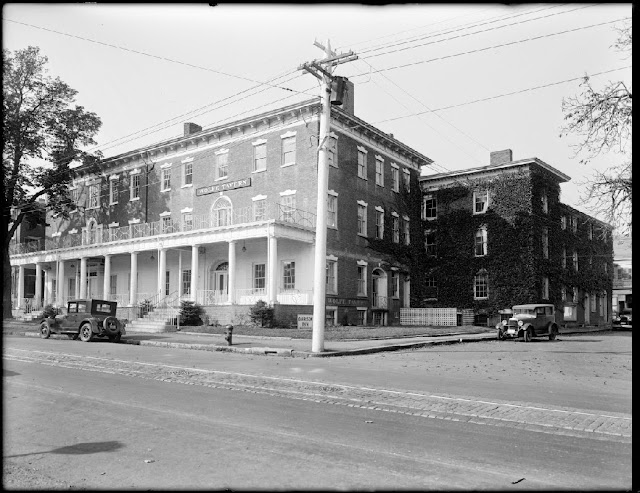 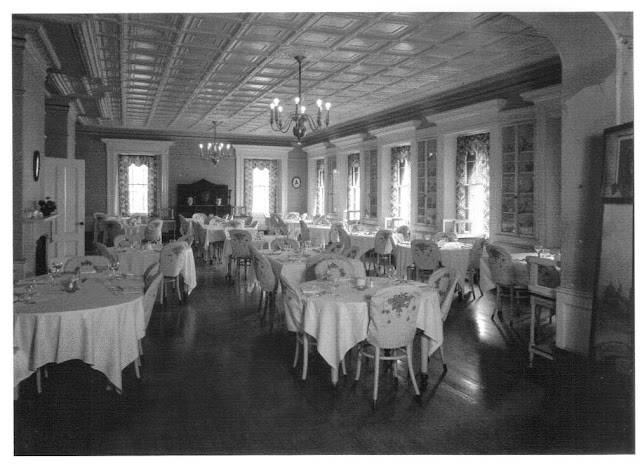 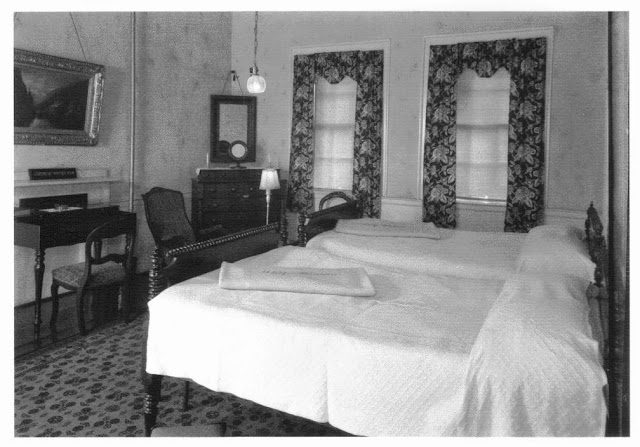 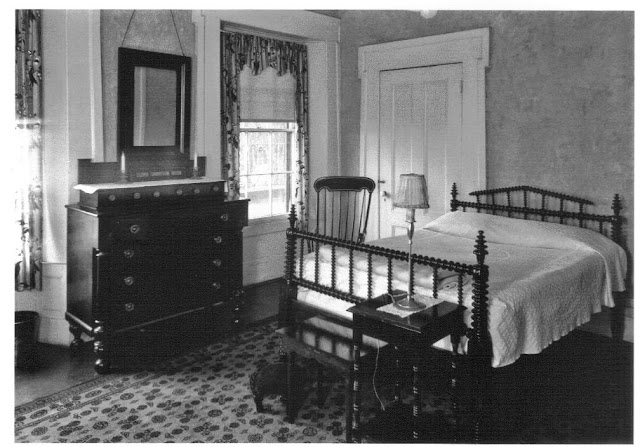 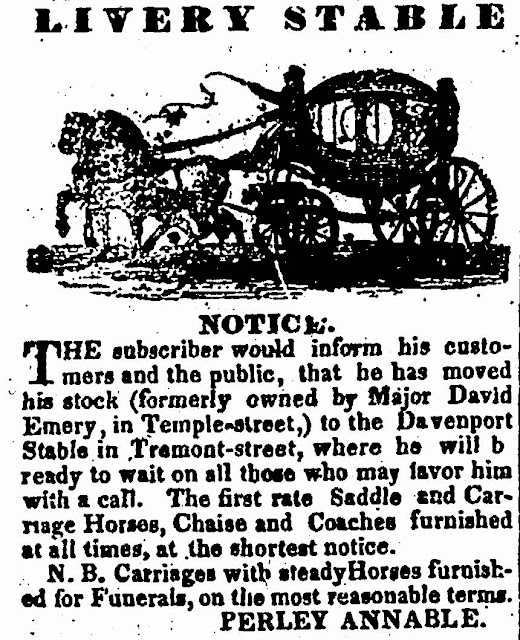 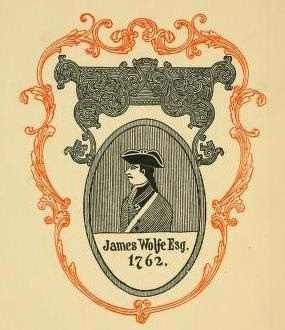 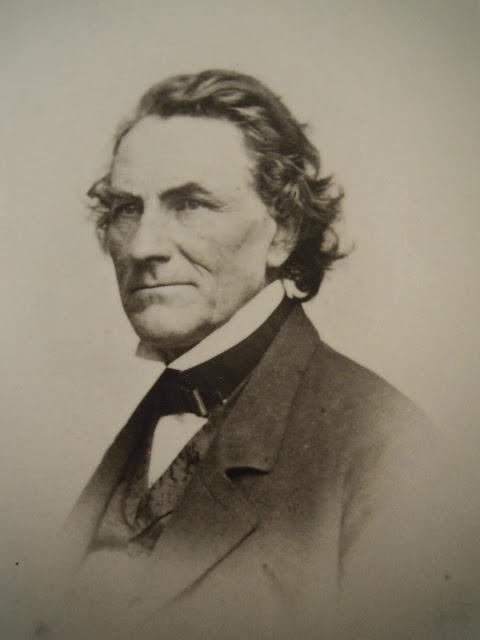 Henry C. Perkins, was born November 13, 1804 in Newburyport, the son of Thomas and Elizabeth Perkins. He married Harriet Davenport, November 7, 1828* [The Boston Recorder & Telegraph, 1828.] He died February 1, 1873, Newburyport. See Passing of the Wolfe Tavern
Dr. Perkins, attended Newbury Academy and entered Harvard in 1819, graduating in Class of 1823, at age 19. After graduation he studied medicine with the older Dr. Warren of Boston, and finished his studies in Newburyport with Dr. Richard S. Spofford, husband of the writer Harriet Prescott Spofford. Dr. Perkins began his practice here in 1827 and continued his profession until his death.
“Dr. H.C. Perkins was known to be the first person in American to imitate the invention of Daguerre, in taking pictures by the light of the sun. In doing this he made his own apparatus even to grinding the lens. The first successful picture he took was of the house on the corner of Centre and Middle streets, then occupied by the late Enoch Huse, which he kept in his possession, and is now held by the family.”* [Newburyport Herald, February 3, 1873.]
He was not only interested in medicine, but also the sciences. He kept up with the latest observations in meteorology, microscopy and astronomy. He represented Newburyport in the State Legislature, was a director of the Public Library, trustee of the Putnam Free School, trustee of the Institution for Savings, a member of the American Academy of Arts and Sciences and a member of the Committee on the Observatory of Harvard University.


Through the Lens
Revised and Enlarged Edition
Updated June 10, 2007
DRAFT
Page 8 of old book
Making this all double space for additions and corrections by reviewers.
DEDICATION
We dedicate this book to Dr. Henry C. Perkins, (1804 – 1873) and to all the area photographers who followed him, in recognition of the value of their work. Without their record, we could not appreciate, nearly so well, the flavor of our beloved surroundings. Many of our photographers were dedicated enthusiasts and little of moment eluded their keen eyes. This place has been well photographed for the edification and enjoyment of residents and visitors, and for anyone who agrees that “Newburyport is Everyone’s Home Town.”
Some clips from News Archives 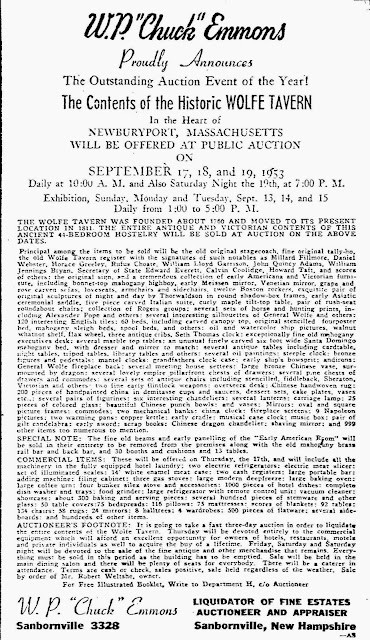 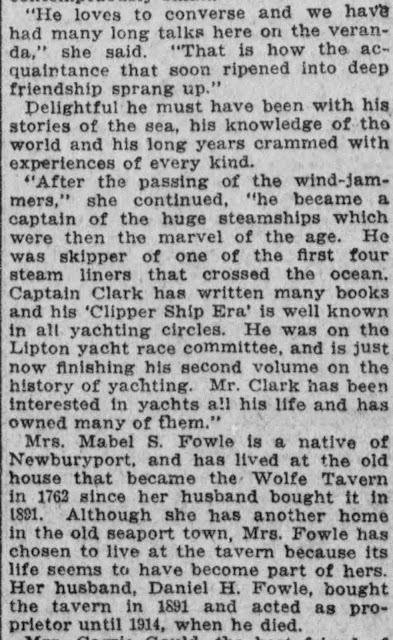