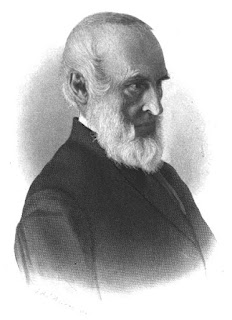 Poet John Greenleaf Whittier, U S Senator Daniel Webster, and Colonel Reverend William Batchelder Greene all related and researching their lineage. To sort out the ancestral lines, these fellows had to depend on letter writing. Whittier contacted the New England Historic Genealogical Society (NEHGS) for help with his genealogy research.
Whittier did not have the Great Migration Papers or Facebook, but correspondences show how close his queries came to mapping out the family tree. 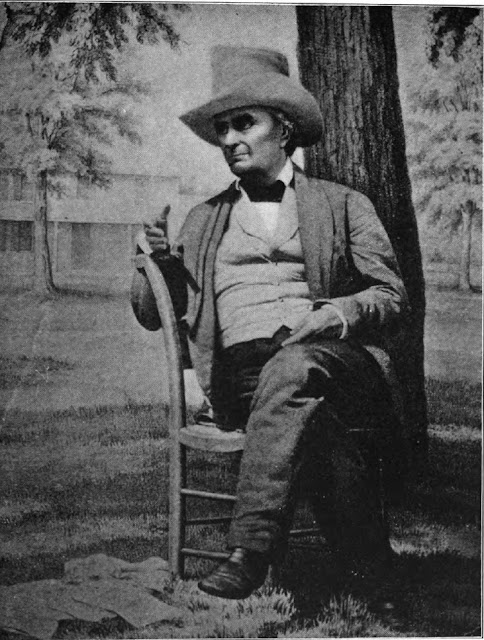 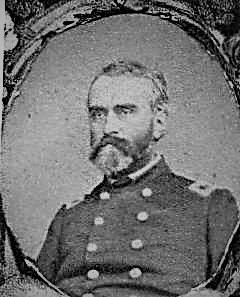 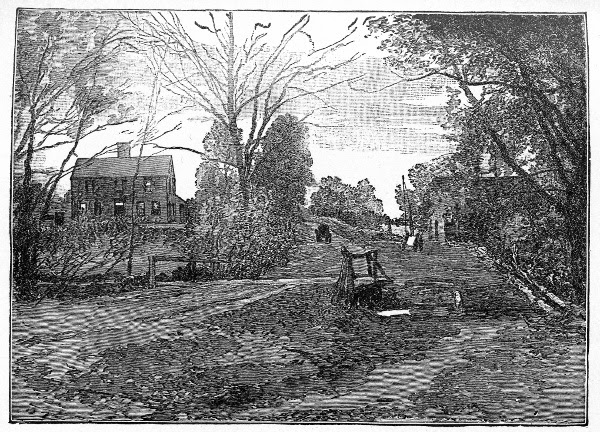 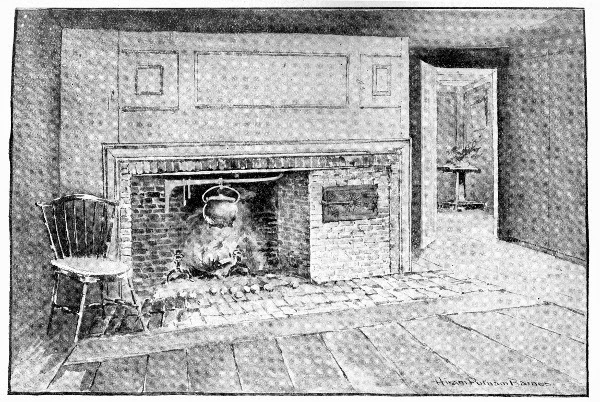 "My mother was a descendant of Christopher Hussey, of Hampton, N. H., who married a daughter of Rev. Stephen Bachelor, the first minister of that town.
"Daniel Webster traces his ancestry to the same pair, so Joshua Coffin informed me. Colonel W. B. Greene, of Boston, is of the same family."

letter of reply to JGW from Col. W. B. Greene:

"Jamaica Plain, Mass., Sept. 24, 1873.
"Mr. D. B. Whittier, Danville, Vt.
"Dear Sir,—Yours of September 20 is just received, and I reply to it at once. My grandfather, on my mother's side, was the Rev. William Batchelder, of Haverhill, Mass. In the year 1838 I had a conversation, on a matter of military business, with the Hon. Daniel Webster; and, to my astonishment, Mr. Webster treated me as a kinsman. My mother afterwards explained his conduct by telling me that one of Mr. W.'s female ancestors was a Batchelder. In 1838 or 1839, or thereabouts, I met schoolmaster Joshua Coffin on a Mississippi steamboat, near Baton Rouge. The captain of the boat told me, confidentially, that Coffin was engaged in a dangerous mission respecting some slaves, and inquired whether my aid and countenance could be counted on in favor of Coffin, in case violence should be offered him. This he did because I was on the boat as a military man, and in uniform. When Coffin found he could count on me, he came and talked with me, and finally told me he had [once] been hired by Daniel Webster to go to Ipswich, and there look up Mr. W.'s ancestry. He spoke of Rev. Stephen Batchelder, of New Hampshire, and said that Daniel Webster, John G. Whittier, and myself were related by Batchelder blood. I did not feel at all ashamed of my relatives. In 1841 or 1842 Mrs. Crosby, of Hallowell, Maine, who had charge of my grandfather when he was a boy, and knew all about the family, told me that Daniel Webster was a Batchelder, that she had known his father intimately, and knew Daniel when he was a boy. At the time of my conversation with her, Aunt Crosby might have been anywhere from seventy-five to eighty-five years of age. When I was a boy, at (say) about the year 1827 or 1828, I used to go often to the house of J. G. Whittier's father, a little out of the village (now city) of Haverhill, Massachusetts. There was a Mrs. Hussey in the family, who baked the best squash pies I ever ate, and knew how to make the pine floors shine like a looking-glass.

"This is, I think, all the information, in answer to your request, that I am competent to give you.
"Yours respectfully,
"William Batchelder Greene."

In a note addressed to the New England Historical and Genealogical Society, JGW wites: "On my mother's side my grandfather was Joseph Hussey, of Somersworth, N. H.; married Mercy Evans, of Berwick, Me."

William Sloane Kennedy in his book, "John Greenleaf Whittier: His Life, Genius, and Writings," remarks on the lineage:
Some of the genealogical links connecting the Husseys of Somersworth with those of Hampton have not yet been recovered. But this much is known of the family, that in 1630 Christopher Hussey came from Dorking, Surrey, England, to Lynn, Mass. He had married, in Holland, Theodate, the daughter of the Rev. Stephen Bachiler, a Puritan minister, who had fled to that country to avoid persecution in England.

The author was told by a local antiquary in Hampton, N. H., that there is a tradition in the town that Stephen Bachiler would not let his daughter marry young Hussey unless he embraced the Puritan faith. His love was so great that he consented, and came with his bride to America, where two years later his father-in-law followed him. Stephen Bachiler came to Lynn in 1632, with six persons, his relatives and friends, who had belonged to his church in Holland, and with them he established a little independent church in Lynn. The progenitive faculty of this worthy divine must have been highly developed: he was married four times, and was dismissed from his church at Lynn on account of charges twice preferred against him by women of his congregation. The recorded dates show that both he and his son-in-law, Hussey, came to Hampton in the year 1639. The Hampton authorities had the previous year made Mr. Bachiler and Mr. Hussey each a grant of three hundred acres of land, to induce them to settle there.

When and how the Husseys became Quakers is not known to the author. But in Savage's Genealogical Dictionary, II page 507, it is recorded that as early as 1688 a certain John Hussey of Hampton was a preacher to the Quakers in Newcastle, Delaware. The mother of the poet was a devoted disciple of the Society of Friends. That she was a person of deep and tender religious nature is evident to one looking at the excellent oil-portrait of her which hangs in the little parlor at Amesbury, Massachusetts. 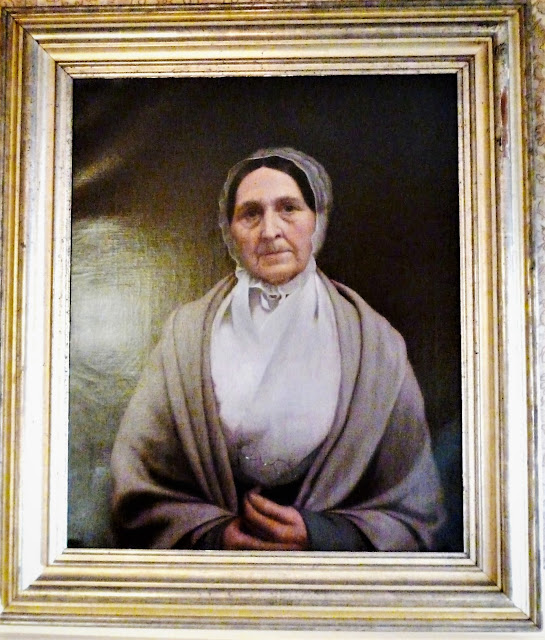 Abigail Hussey Whittier Portrait From Tony Shaw blog taken at The Whittier home: John Greenleaf Whittier (again) in Amesbury, Massachusetts: Literary New England #8
The head is inclined graciously to one side, and the face wears that expression of ineffable tranquility which is always a witness to generations of Quaker ancestry. In the picture, her garments are of smooth and immaculate drab. The poet once remarked to the writer that one of the reasons why his mother removed to Amesbury, in 1840, was that she might be near the little Friends' "Meeting" in that town. 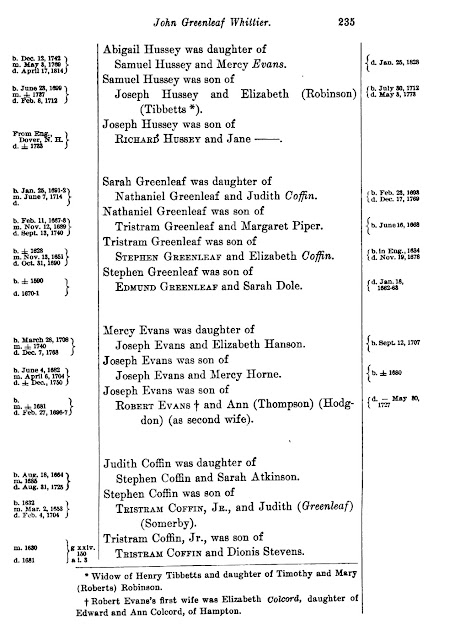 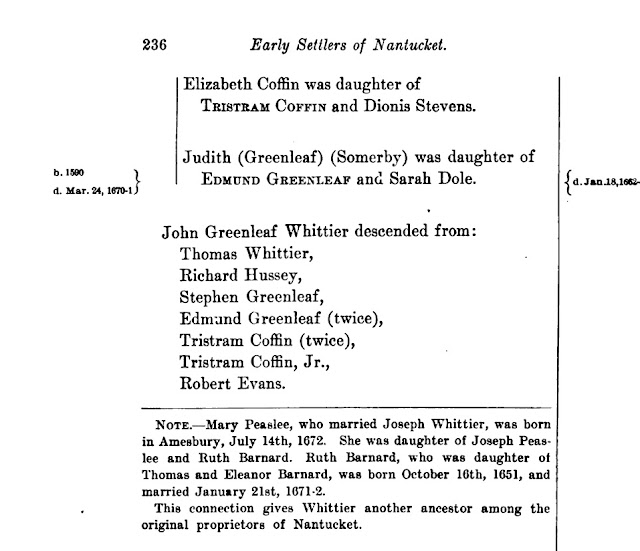 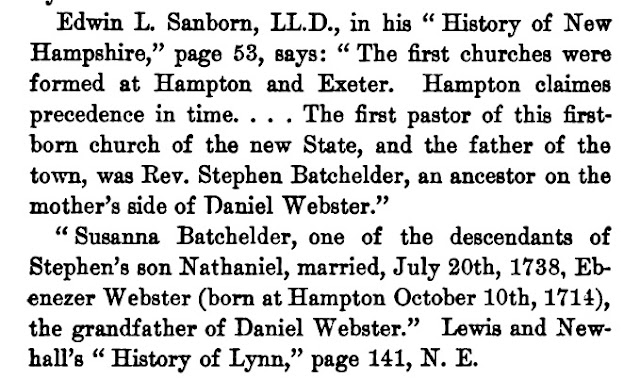 The above mentions Webster and Greene association the Rev Stephen Batchelder storm on pages 96-98.  http://www.hampton.lib.nh.us/hampton/biog/bachilertoc.htm 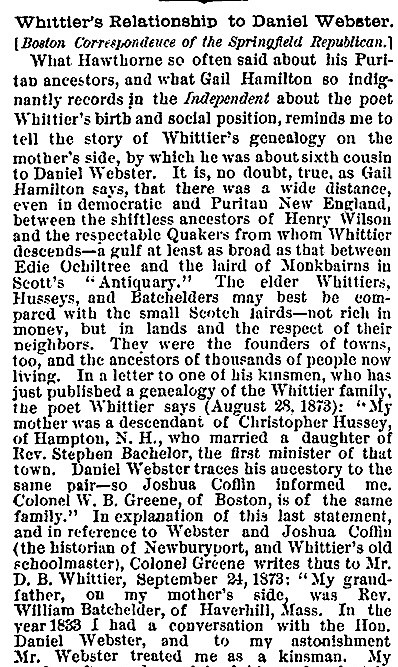 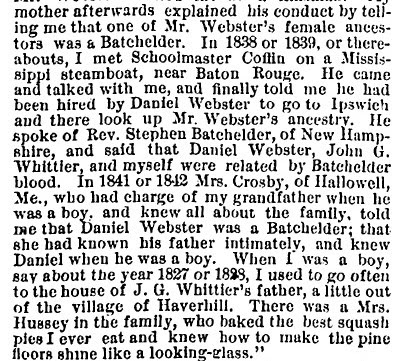 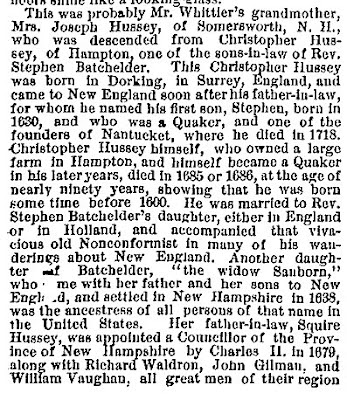 The newspaper clip below mentions some relics not traced yet, but any information would be appreciated. 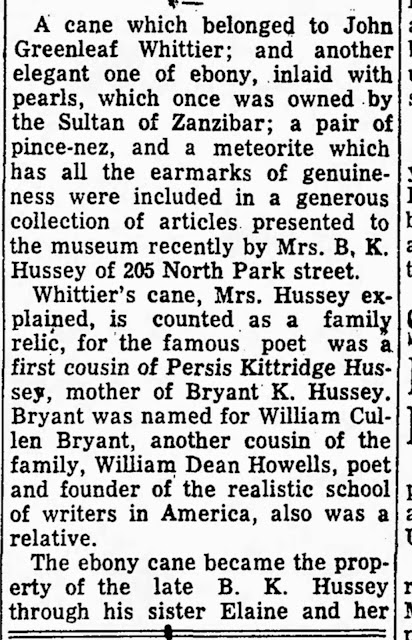 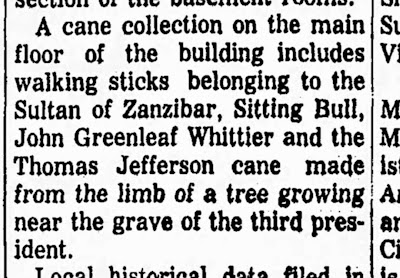