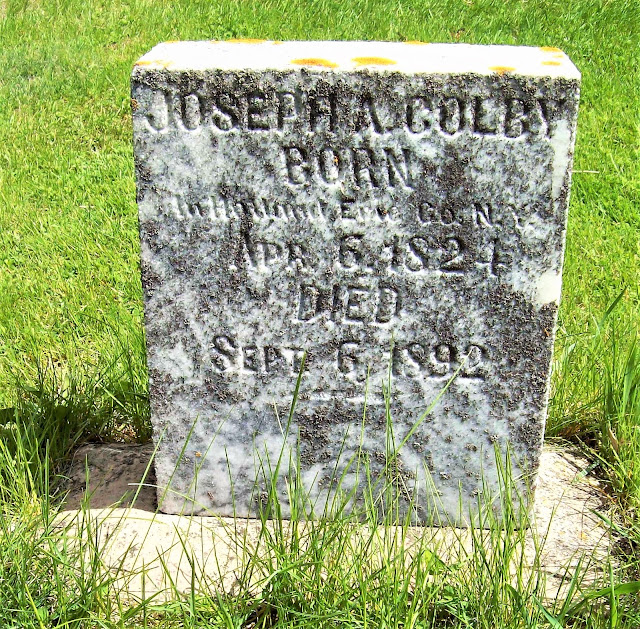 Census Place: Alexandria, Douglas, Minnesota Source: FHL Film 1254618 National Archives Film T9-0618 Page 491C
He died on 6 SEP 1892 at Portland, Multnomah County, Oregon. The Douglas County News, Alexandria, Minnesota Thursday, September 15 1892, page 4, col. 1. Last week just after going to press news came of the death of J. A. Colby at Portland, N.D. He was kicked and trampled by a stallion and lived only six hours after the injury was received. Mr. Colby was a well known resident of this county for about 24 years and removed to Portland a year ago last spring.
The Lake Review
Osakis, Douglas County, Minnesota
Thursday, September 15, 1892
Page 3, Col. 5.
Fatal Accident.
A sad and fatal accident happened to Mr. J. A. Colby, of this city, last Tuesday morning about 10 o’clock. It appears that Mr. Colby had just taken a horse belonging to J. J. Warley, from the stable with the intention of sending him around the track a few times as had been his usual practice, and when only a few rods from the barn the horse stopped, throwing the old gentleman between the shafts and against the horses feet and was so trampled upon and injured that he died in about three hours in spite of everything that could be done for him. Several of his ribs were broken and one leg was badly shattered besides which he was injured internally.
Mr. Colby, though only a resident of the town for about a year and a half, had come to be greatly respected by all our citizens. It is a very sad affliction for the family, following so closely, as it does, the death of the son, Frank H. Colby, last winter.—[Portland, N.D., Press].
This family has been noted for its loyalty to the country, indeed, every male member in every generation has served his country more or less in the wars which have been inflicted upon this land. Mr. Colby’s grandfather, Ezekial Colby, JR  was born in New Hampshire, and moved to Vermont, whence he came to the State of New York, settling in Erie county in 1808. He served as a soldier in the Revolutionary War. On coming to Erie county, New York, the country was wild, and they were among the very first pioneers who settled in and began the improvement of that county. Jonathan, the father of our subject, served in the War of 1812, and for honorable service attained the rank of lieutenant and finally received a colonel’s commission. 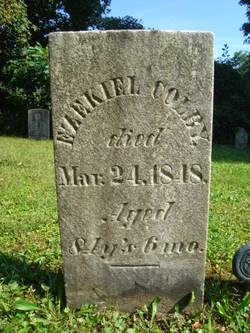 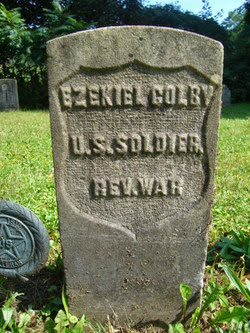 From: Emigration began to roll into the future town of Holland.

Ezekiel Colby settled in the valley, and soon after came Jonathan Colby, who still survives, being well-known as “Old Colonel Colby." Nathan Colby located on the north part of Vermont Hill, and about the same time Jacob Farrington settled on the south part, east of the site of Holland village, where there was not as yet a single house—another instance of the curious readiness of many of the first comers to neglect the valleys for the hill-tops.
Hannah Cooper, the mother of the subject of this sketch, was the daughter of Joseph Cooper, who was born in New Hampshire, and came to Erie county where he settled in 1810.~ He was a soldier in the Revolutionary War, and was in the famous battle of Brandywine. He held a captain’s commission during the entire service. Jonathan Colby’s family numbered eight children, three of whom lived in Erie county, New York, and two in Douglas county, Minnesota.
Joseph A. Colby received his early training on a farm, remaining in that business until he was seventeen years of age. At that time he came west, spending a short period in Indiana, whence he went to Chicago. Here he remained three years, at the end of which time he returned to Aurora, Erie county, New York. Desiring to better prepare himself for life’s duties, be commenced a course at the Aurora academy, where he studied for two years. He then engaged in the study of law, entering the law office of his brother-in-law, P. M. Vosburgh. Then he engaged in the mercantile business, forming a partnership with C. J. Hamlin, running for a time what was known as the city store. His firm had three branch stores, also, and did a large business for a number of years. Mr. Colby continued in this line from 1844 to 1856, at which time he sold out and came west, settling in Hastings, Minnesota. Here he engaged in farming, and also in the wheat business. Still later he engaged in the grocery trade, until the breaking out of the war in 1861. At this time he turned his attention to raising volunteers to enter the union army. He helped to recruit a company of troops with Marshall, of St. Paul, and this company was finally consolidated and called Company K, Eighth Regiment Minnesota Volunteers. This company came west to Alexandria, Douglas county, and built a stockade, where they remained in the service until 1863.

In this year the company was disbanded, part of them going with General Sibley’s command and part with General Sully. During this time Mr. Colby was on duty at St. Paul, purchasing for the Government different supplies. He bought horses with saddles and bridles and necessary trappings He was in the service of the Government for four years. In 1856 Mr. Colby came to Alexandria, settling on a farm five miles south of the village on the shores of Lake Mary to organize the county in 1866, and for years engaged in farming until 1882. However, prior to this time, in 1875, he moved his family into Alexandria, where he engaged in the livery business, also running a stage line to Morris, Parker‘s Prairie and Pomme de Terre. During this time he worked up quite a. business, employing, continually, four or five men. The stage line business was kept up by him until he was virtually frozen out by the advent of the railroads. He has made considerable money in buying and selling horses. He bought the livery building,,which he now occupies, in 1880, keeps twenty horses, and supplies tourists with teams during the summer months. He owned a good residence on H street.
Mr. Colby was married in the year 1843 to Miss Cyrena McKillips, of Erie county, New York. They had three children—Frank, Rosa Dwight, and Fred Frank Colby was married in 1865 to Lizzie Thomson, by whom he has had three daughters— Rosa, Lena and Abbie. Frank enlisted in the Third Minnesota Regiment of Volunteers in 1861 as a private, rising to the rank of corporal. He served in the war until its close, losing his health from exposure and hard service. He was a resident of Alexandria. Rosa, now Mrs. Truax, formerly Mrs. Stone, was first married to Mr. Stone, by whom she had one child—Archie. In 1876 she married Mr. Truax, by whom she has had two children—Joseph and Thura. Fred married Miss Anna Siples in 1867, by Whom he has had one child —Arthur. Fred Colby is a resident of Hastings, Minnesota, and is agent for the St. Paul and Milwaukee Railroad Company.

Joseph A. Colby has been identified with the interests of Douglas  county for many years, coming here in an early day, and becoming one of its first citizens. He helped in politics, and with his wife and family belonged to the Episcopal church of Alexandria. He took about 400 acres, and held the office of justice of the peace in Lake Mary township. He also held the office of town clerk for three years, and was connected with the board of school directors. Mr. Colby affiliates with the republican party . 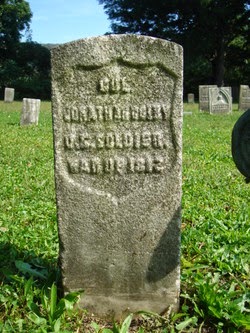